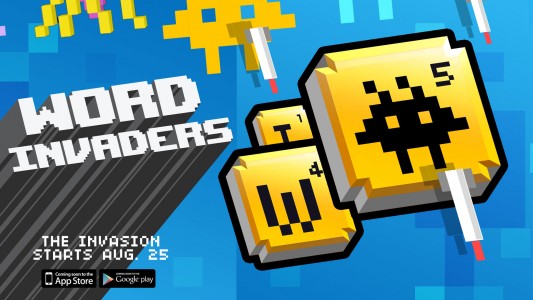 Word Invaders is what you get when you cross Words with Friends and Space Invaders. It’s a frantic retro mash-up for those who find traditional word games a little slow-paced. Word game enthusiasts and casual gamers will love the instantly addictive game mechanic and 8-bit nostalgia of Word Invaders, a word game from the Australian app development studio DreamWalk Interactive. Word Invaders is DreamWalk’s latest mobile game, following the success of their #1 sports game Surfy.

The aim is to create as many words as you can before the invaders destroy your tiles. The bigger the word, the bigger the score. You can also unlock special tiles and multipliers to help you through the increasingly difficult levels in a variety of ways, from shielding your tiles to increasing your tile values.

If you’re a fan of Words with Friends or Scrabble but crave a bit more action, word invaders is the game for you. The scoring is surprisingly familiar but the game play is from another planet. It’s a frenzied word-lovers delight with 30 levels of dictionary busting fun.