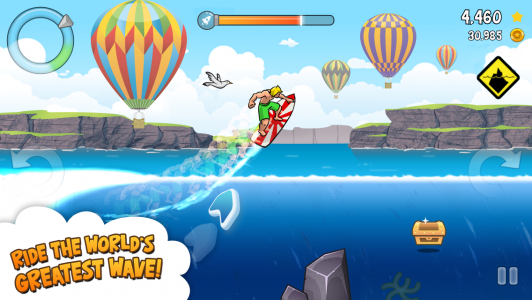 Today began with some good news, Surfy was approved by Apple!

We are always happy when we get that little message – “Your app is now ready for sale”, but this morning’s announcement brought with it a little more excitement than usual because Surfy is our first major internal game release.

Almost 12 months in the making, Surfy started out as a pet project for co-founder Sam Russell but quickly turned into an official DreamWalk project when Sam and brother Joe bought back the DreamWalk business from The Wellcom Group in March of this year (2014).

While DreamWalk has always had a strong focus on developing apps for clients, Surfy will be our fourth internal project to be released under the DreamWalk banner, the first three being DreamWalk (the Mobile Treasure Hunt), iClassmate and Jam.

Surfy is a turbo-charged surfing side-scroller inspired by 8bit classics like California Games. It takes the simple game controls and mechanic of the 1980s classics and combines them with modern features, like powerups, gravity defying stunts, head to head challenges and a surf store, to name a few.

Surfy is due for release on September 25, 2014 and will be available for free on iOS devices running iOS7.1 and higher.

Check out the following links for more information and to stay up to date with the latest Surfy developments: