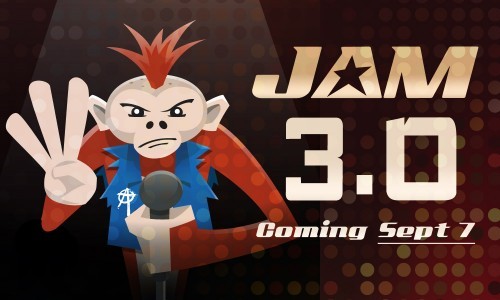 Over one year and half a million users later, the number 1 ranking music app – Jam for iPhone, is giving back to its users with a candy shop of new features.

September 25, 2014 (Melbourne, Australia) – Wannabe rock stars around the world will soon be jamming out even sweeter tunes as DreamWalk Interactive, developer of the popular iOS app, Jam, announce a major new update for release on September 7, with a plethora of new tools and features.

Last year (2013) DreamWalk’s innovative music creation game was downloaded by half a million users around the world, reached the number 1 spot on the App Store in 26 countries and was widely praised by users and the media alike. Jam was a standout at MacWorld in San Francisco, grabbed media attention at SXSW in Texas with guest Jammers Macklemore and Ryan Lewis and even had Model Alexa Chung creating instant hits. Now, a year later, DreamWalk have listened to their users and are releasing Jam 3.0 with a range of new features inspired by user feedback.

“Our users are so passionate and engaged” Said DreamWalk General Manager Joseph Russell. “It really makes sense to listen to them and adapt accordingly.”

Among the new 3.0 features are:

Jam is currently available for FREE on the iTunes App Store with the 3.0 update due for release on Sept. 7.

DreamWalk is a boutique app studio based in Melbourne, Australia. It was founded by brothers, Joe and Sam Russell in 2008 with the development the world’s first commercial GPS treasure-hunting app, also called DreamWalk. DreamWalk’s most recent game, Jam for iPhone, reached #1 on the App Store music app charts in 26 countries, was featured in dozens of publications and showcased at SXSW 2013. https://dreamwalk.com.au/