Is an Apple Feature the Holy Grail for an App Developer? 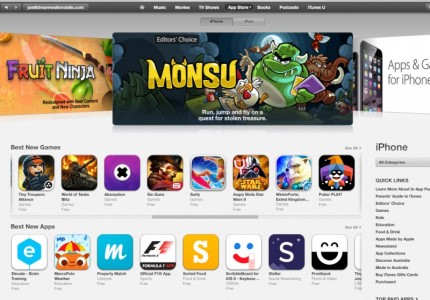 A prominent spot on the front page of the App Store has long been the ultimate goal for app developers looking to build an audience for their apps, but is an Apple feature all it’s cracked up to be? Here we look at the real-world affects of an Apple feature using one of our own recent releases as a case study.

Two weeks ago (Sept 25), after about a year of development, we launched an iPhone game called Surfy on the App Store. The next few days were filled with the familiar nervous tension that comes with releasing a new app. As download and in-app purchase statistics start coming in it can be hard to make sense of the data, especially with no real benchmarks to judge your app’s success by. You start to ask yourself questions like ‘Are these download numbers normal?’, ‘Shouldn’t I be making more money than this?’, ‘Did I do enough pre-release marketing and PR?’, ‘Is my app even any good?’ and inevitably ‘When will Apple notice my app and feature it?’.

As the days passed, positive reviews and articles started to appear around the web (with some help from our PR team at Appency) but download numbers stayed relatively low (by our educated guesses) reaching around 1,200 by day five. We soon began to lose some of our faith in the concept. Maybe Surfy is just too hard or maybe our marketing strategy isn’t working… that was our line of thinking at the time. Then on the Friday morning, a week after launch, our little Surfy icon popped up on the front page of the Aussie App Store in the ‘Best New Games” section. We were featured by Apple.

Now, having our apps featured by Apple is not an entirely new experience for us. Previously our apps ‘DreamWalk – The Mobile Treasure Hunt’, ‘Jam for iPhone’ and ‘Camping Around Australia’ (for client Hardie Grant) were all featured prominently on the App Store when they were released and we saw a significant spike in downloads as a result. Surfy was different though, Surfy was our first game and we were extra keen see what the effect of the feature would be. Almost instantly we noticed a big jump in downloads (around 2,000 per day) and within twenty-four hours we were charting in the sports games, action games, overall games and overall apps charts in Australia and New Zealand. Before too long Surfy was sitting at #3 in the sports games charts and suddenly it occurred to us that we might actually be able to take out the top spot! Could Surfy actually get to #1? There was one small problem, FIFA2015 was sitting at #1 and had been there for a while. FIFA is a big brand, presumably with a big marketing budget and a broadly appealing theme, so it was not going to be easy, but we decided then and there that we were going to do everything in our power to give Surfy a shot at the top position.

We immediately got to work on social media, posting, tweeting, liking and sharing as much Surfy related content as our networks would tolerate. We asked our friends and families to do the same, including some friends who are reality TV personalities from The Bachelor, Australian Idol, The Voice and Big Brother. We also setup a small (sub $1,000) Facebook ad campaign to run in a short burst using the Facebook app install format and targeted iPhone users in our key demographic with applicable interests. Within 24 hours the results of all our marketing activities started to show and we jumped up a spot to #2 in the sports games chart and #11 in action, overtaking Clash of Clans, Subway Surfers, Candy Crush, Words with Friends, Kim Kardashian and even Fruit Ninja, which was also featured in “Best New Games”.

Pretty soon our Facebook ad budget run out, our social media posts began to get buried in news feeds and we expected our rankings to start dropping, but then something unexpected happened. Instead of dropping, Surfy continued to climb. The phenomenon was most noticeable in the overall charts where we continued on an upward trend, skipping up to 5 apps at a time. Four days into our feature, at around midnight, Surfy knocked FIFA2015 out of the top position and took its place as the #1 sports game on the Australian app store. We had done it!

After a brief moment of celebration we decided to look into the stats and try to figure out what caused Surfy’s meteoric rise to the top. Obviously the feature in ‘Best New Games’ played a hugely significant role and we are sure our social media work resulted in some much needed downloads, but one thing still didn’t make sense. Why did Surfy do so much better than the other apps, like Fruit Ninja, which were featured at the same time, in some cases far more prominently than Surfy? As we dug deeper into our Flurry user data, the answer jumped out and slapped us in the face. After just 15,000 downloads, our user base were already collective clocking up months of game play every day. Our session lengths and user retention was way above average and in some cases more than double that of the average sports game. In short, people loved our game and were playing it a lot!

The conclusion we have drawn is that the App Store feature definitely triggered a huge increase in organic traffic to our app store page, resulting in increased downloads at about ten times the initial (pre-feature) rate. As the game was exposed to more and more users, the concept, game mechanic and quality of the app became more and more important and good user experiences began to fuel real word conversations, further accelerating the download rate and pushing Surfy up above its competitors, which we can only assume lacked the word of mouth advertising Surfy benefited from, probably partially due to the fact Surfy was a newer concept. Social media marketing and Facebook ads played their part with small spikes in overall rankings observed immediately after celebrity posts and ad bursts.

In a nutshell, it is our belief that an Apple feature is definitely the holy grail for app developers when it comes to marketing, but in order to capitalize on that big burst of new users and rise above your competitors, the quality of your app becomes really important. Word of mouth is still a marketing force to be reckoned with and could be the difference between #3 and #1 on the App Store.

Surfy currently sits at #1 in the free sports games chart, #3 in the action games chart, #9 in games overall and #40 in apps overall on the Australian App Store, as well as various other positions in App Stores around the world. We are now studying our user data and working on an app update to further increase user engagement and monetization so we are ready for the next holy grail, a US App Store feature!