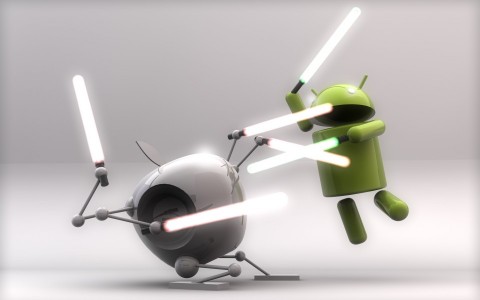 It’s about that time of year again where my Facebook feed fills up with keyboard warrior commentary arguing which is better: iOS or Android. Every time Apple announces a new iDevice the trolls immediately turn to social media with some less-than-enlightening take on why this year’s model is awful and how Android is so much better. The problem with the argument is it’s so subjective that it’s impossible to definitively rate one OS above the other. As a developer for both platforms I see a lot of myths and misrepresentations in the debate, so I have set out here to expel some of these in the hope that you can make a more informed choice when purchasing your next smartphone.

Myth 1: Android is more successful because it has a larger market share.

It is true that worldwide Android has a solid lead when it comes to the quantity of devices sold, but this means almost nothing to the end user. These stats are quoted all over the Internet and used as ammunition in the debate without much thought as to what it means in practical terms. What this number seems to falsely imply is that because there are more devices there will be a larger number of useful apps available and better support. After all, what developer wouldn’t want to build their app for the biggest market?

This myth fails to take into account several other key metrics used when deciding which platforms to support. While Android has a greater number of devices in the wild, Apple’s sales numbers outperform Android 3 to 1. iOS users are far more likely to spend money in your app than Android users. To me this says I can potentially get three times the return on investment if I build my app for iOS first and leave Android for later. What this means to you is that more developers choose to go iOS only to start with, meaning limited app availability and longer waits for Android users.

Also missing from this picture are the types of devices sold. Android powers a plethora of connected devices ranging from coffee makers to karaoke machines. The hardware in these devices is so diverse that many of the lower-end devices will not be able to smoothly run many apps and services, if at all. A $29 Android phone simply can’t compete with a $999 iPhone 6 in terms of hardware capability. Recently we built an app called Jam for iPhone, and we had the internal debate on Android support. It turns out Jam needs quite a bit of grunt to do the complex calculations and audio manipulation it needs. So we had to look at the Android market share divided into two distinct categories – “capable” devices (one’s which have the hardware to support such processing) and “non-capable” devices. When you differentiate like this, Android’s apparent advantage disappears into oblivion as almost 80% of all Android devices fall short of the hardware performance seen on an iPhone 5.

To get an app on the Google Play store, all you have to do is upload it and set it to available. In contrast, to get your app on the App Store you have to go through the notorious Apple approval gauntlet. Surely this means only high quality apps are made available on iOS right? Incorrect.

While Apple may not approve the worst of the worst apps, it is light-years behind Google from a search point of view. This means that Google Play has lots of “invisible” crap pushed down into obscurity by Google’s search genius while the App Store shows you the 1,000th Flappy Bird clone in all it’s glory on page 1. I don’t know about you but I care far more about high quality search results.

This is possibly the most frequent misrepresentation I see and is used almost ubiquitously by Android fans when trying to discredit the iPhone. They tend to focus on a set of hardware specs and make the assumption that specs alone define the user experience. Yes certain Android devices brought to the table features like NFC, Large / high pixel density screens and fast multi-core processors first, but having the capability to do things doesn’t equate to actually doing them. Because Apple controls the whole hardware-software ecosystem they can integrate software services and hardware with far more care and as a consequence hardware like NFC becomes more than just a chip with the introduction of Apple Pay, where the Android equivalent remains elusive.

User experience seldom relies solely on hardware. Rather, the software that is designed to interface with the hardware is the make or break here. Put that 2012 Android phone next to the iPhone 6 and see which one feels like a better experience. I can tell you now that crazy fast multi-core chip means far less to you than having a smooth, responsive user interface with well thought out apps and utilities.

Every app crashes. There are simply too many different usage scenarios that the developer can never cover them all. We call the harder-to-test ones “edge cases”. There will always be the dude moving from WI-FI to 3G while trying to download an in-app purchase using a foreign iTunes account in a different currency on an old device running a different version of the operating system while switching between apps.

This problem is not unique to Android. It happens on all devices that run any kind of software, always.

We are really just scratching the surface here on a debate that is likely to continue until the next generation of devices render both platforms obsolete. I personally use an iPhone and wouldn’t have it any other way but it really just comes down to your individual requirements and preferences. Don’t waste time in one of these social media back-and-forths because you can never win when you’re comparing apples with oranges. Just get what works for you and be done with it!