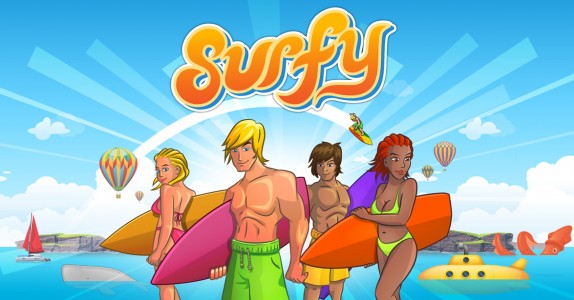 Land tricks, collect power-ups and avoid a wipe out in this addictive, turbo charged surf adventure.

With simple two-finger controls Surfy is a fast paced and strongly addictive ride reminiscent of 8bit classics such as California Games. The ride begins when players are dropped into a wave by helicopter. Players must then stay ahead of the break while navigating exotic locations, performing tricks and collecting power-ups to compete for a spot on the leaderboard.

From surviving violent tropical thunderstorms to performing radical aerial stunts into outer space, surfers rack up points and coins when achievements are unlocked and tricks are landed. Coins are redeemable in the ‘Surf Shop’ for upgraded boards and power-ups for invincibility, gravity-defying jumps, power boosts and more. Click here to view the trailer for Surfy.

“We wanted to put a modern twist on a classic genre,” says Sam Russell, head of development at DreamWalk. “We hope gamers find Surfy as addictive and fun as the games that inspired us to make it.”

Features of Surfy include:

· Earn coins: Find treasure chests and challenge friends to earn coins, then hit the ‘Surf Shop’ to redeem them for power-ups and radical new boards.

· Multiplayer mode: Surfing is even more fun with friends! Challenge a pal to a surf-off.

· Global Leaderboard: Move up the rankings as you compete with the best in the World.

Surfy is available now on the iTunes App Store for free.

DreamWalk is a boutique app studio based in Melbourne, Australia. It was founded by brothers, Joe and Sam Russell in 2008 with the development the world’s first commercial GPS treasure-hunting app, also called DreamWalk. DreamWalk’s most recent game, Jam for iPhone, reached #1 on the App Store music app charts in 26 countries, was featured in dozens of publications and showcased at SXSW 2013. https://dreamwalk.com.au/