DreamWalk In the Media 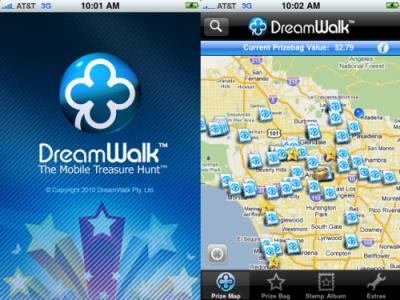 A collection of quotes and media articles about the new DreamWalk Mobile Treasure hunt app.

Investigative Report: Does Dreamwalk the Mobile Treasure Hunt Actually Work? Posted by Trevor Sheridan on: March 5th, 2010, 12.21 pm An app that lets you win free stuff including food, tvs, and wiis by just going to different locations sounds too good to be true, right? That’s what I thought when I first heard of Dreamwalk, so when it was released it was time to put it to the test. The big question is, does this system actually work? Read full report

Aussie start-up takes on Foursquare,Gowalla (..and Google?) Posted by jtklepp March 10, 2010 Aussie start-up Dream Walk Mobile just launched their Dream Walk App. Essentially this is a “treasure hunt” style app, where users fire it up, and can see offers from local retail stores in their vicinity. The principle is fairly simple: As an advertiser, you offer instant prizes, stamps that need collecting, or clues, which the user has to solve that leads to the ultimate prize. To make it all work, they have a few, but very important rules that advertisers must obey: The rules are probably what will make this work for Dream Walk. Gowalla and Foursquare offer a lot more in terms of network value and integration with social networks. Dream Walk Mobile is simple: Use it and you will get free stuff. Dream Walk also has the advantage that the value of using their app is not tied to the number for people or friends using it.

You can of course argue how long it would take Google to offer the same if they decided to. A week? But Google does not at least currently have this model, and allows advertising on maps based on bidding. It could very well be that Dream Walk Mobile’s model is what will have them be somewhat unique, at least for a while. Read Full Article…

Dreamwalk App For iPhone Brings A Commercial Twist To Geocaching Phone Blog – By Noel on March 8, 2010 · This is something that could turn out big. A new iphone app called Dreamwalk provides users with a geocaching game that raises the ante a little by getting local businesses involved. Users can use the software to seek out “treasures,” just like any similar game. Except, in this case, participating companies get to hide their own prizes for players to pursue, allowing them to get new prospects through the door in the process.

Dreamwalk is a Bargain Hunter’s Dream AppCraver.com 03.03.10 @ 10:52am Jennifer Beam Score: 8/10 Price: Free Just released this week, Dreamwalk is touted as “the mobile treasure hunt” and in essence, that’s pretty much what it is. It sort of equates to commercialized geocaching, but it’s really a pretty simple concept. Dreamwalk uses GPS technology to show users where prizes, or “treasure,” is waiting to be discovered. If you decide you want to don your pirate hat and go in search of said treasure, you can use your iPhone as the treasure map and claim a prize of your own. A first of its kind, Dreamwalk has the potential to revolutionize mobile marketing while giving bargain hunters and freebie lovers a whole new experience. If you’re wondering where the prizes come from, they are supplied by the various participating businesses. The current estimate of available prizes is a couple of thousand across the US, ranging from free fries and coffee to video cameras and a Nintendo Wii. Still in its early stages, developers at Dreamwalk Pty. Ltd. are setting the stage for more and more businesses to get involved and grow the number of available prizes. This particular feat shouldn’t be difficult to accomplish given that businesses can quickly upload prizes to Dreamwalk’s global map through the Dreamwalk website, and offering something for nothing is a great way to get customers in the door. Read the rest of this entry »

DreamWalk Takes iPhone Users On GPS-Based Treasure Hunts For Real Products Posted by Tyler Tschida on: March 1st, 2010, 2.52 pm DreamWalk is a brand new iPhone app that takes you on GPS-based treasure hunts for real products. So what’s the catch? Well, there really isn’t one as long as you live in a densely populated city in the United States, at least for now since the service just launched. DreamWalk is surprisingly simple service that works a little something like this. Businesses place prizes on the DreamWalk prize map for any DreamWalk app user to find and collect using the device’s GPS. You can pre-locate prizes via the app’s map or you can use DreamWalk’s website to scope out the area. When you find something you are interested in on the map, head to its real world location using your iPhone’s GPS. If you are the first to get there (or one of the first), the prize is yours. It’s that simple. READ MORE…