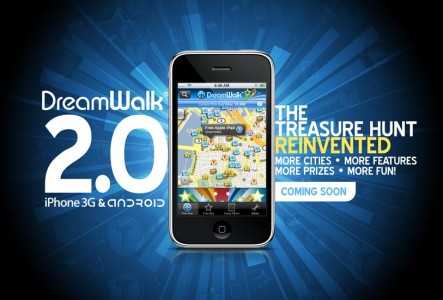 By Jim Brown
After an explosive first month on the iTunes App Store with over 50,000 downloads, a feature by Apple, a top 100 ranking and thousands of dollars worth of prizes claimed, the marketing machine at DreamWalk has suddenly gone quiet. This last week their Twitter feed has been virtually inactive, there have been no new prize additions to the DreamWalk map and no new challenges or hunt clues on the DreamWalk Facebook page. I was beginning to fear the worst, when today, a new post on Facebook by DreamWalk admin put my fears to rest. The post read : cities, more features, more prizes and support for Android handsets!. Check this space for updates. **

It seems the folk at DreamWalk have indeed been busy in their workshop, crafting a new version of their already successful mobile treasure hunt app, and from the small amount of information posted on Facebook, it sounds like something big is coming. An avid DreamWalker myself, I am guessing (and hoping) that this is the calm before the storm, and by the looks of the DreamWalk 2.0 banner now circulating, I may just be right. The few issues holding the previous release back, like iPhone exclusivity and prizes limited to only a few major U.S. cities, look to have been solved in the 2.0 version, which claims Android handset support and more prizes in more cities. They have not hinted at a release date as yet, but the words Ã¢â‚¬Å“Coming SoonÃ¢â‚¬Â imply it is not far off. I imagine there will be dozens if not hundreds of new businesses now planning hunts to coincide with the 2.0 release. It seems mobile marketing and location-based marketing in particular, is about to explode, with apps like Foursquare, Whrrl, Gowalla and DreamWalk gaining more than their fair share of advertiser interest in recent times and consumer interest to match. While many are arguing that the novelty of social check-in apps will soon fade, the predictions for DreamWalk have been quite the opposite. As an experiential marketing platform with location targeting and huge incentives to consumers, the potential power of mobile treasure hunt marketing is undisputed, and so far DreamWalk is the only real player. For me and thousands of mobile treasure hunters around the country, a DreamWalk 2.0 release is very welcome news. If all the claims are true, DreamWalk may be closer to a marketing revolution than we think. Free stuff for the people and advertisers willing to give it to them Ã¢â‚¬â€œ DreamWalk 2.0 here we come! – Jim Brown is a digital media expert, mobile marketing consultant and self confessed Ã¢â‚¬Å“gadget geekÃ¢â‚¬Â operating out of San Francisco California.