The birth of a social network 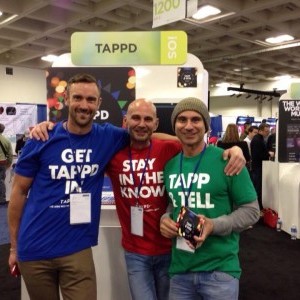 Over the years we’ve developed three serious social networking apps, the most recent being TAPPD, which we built for our client – Burst2Life, and was launched last week at MacWorld in San Francisco. Developing a fully featured social network is no easy feat and is time consuming to do properly. TAPPD took two of our team the best part of a year to develop.

We learn so much from every app we develop and are constantly improving our skills, but there is always that moment of anxiety when a new app we have developed goes live on the App Store. Will the servers hold up if there is a huge spike in users? Will the public actually like the app? Will it even work? Of course the app has already been through pretty rigorous user testing by that point, so we know the most probable
answers to those questions, but there is still that inevitable moment of self-doubt.

In the case of TAPPD, the stakes were even higher due to the amount of time and money being invested in the launch, so things simply had to work perfectly from day one or we could have had a lot of dissatisfied users, which in turn results in negative user feedback on iTunes and general headaches all round. Thankfully, everything went off without a hitch and according to the guys from Burst2Life, it was a very successful launch. The many reviews and interviews that are now popping up around the net reflect this.

So, a year of development later, the app is launched. What happens next?

For any social network to succeed it must reach critical mass. That means attracting enough active users to make the platform self sufficient, self-promoting and if a monetization strategy has been developed, the active user-base should ideally be big enough to turn a profit.

In our own experience with our social Network – Jam for iPhone, we have noticed one very simple but important factor when it comes to user-engagement and growing an active user base. We found that when we are actively engaging in the platform ourselves and updating it regularly, it is much easier to keep our users engaged. While all platforms are different, I think this same basic principal can translate to most apps. If the developers are engaged in their app, some of that passion and excitement inevitably rubs off on the other users.