Promoting an App at SXSW 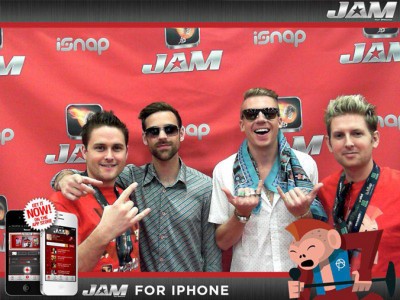 As SXSW comes and goes for another year, I can’t help but reminisce about my own SXSW experience back in 2013 when we launched a little iPhone app we developed, called Jam.

Hangovers and brushes with celebrity are the first things that come to mind but there was also a fair bit of app promotion going on, which forms the basis of this blog post.

For those who don’t know, SXSW (pronounced South By Southwest) is the biggest music, film and interactive conference in the world, held annually in Austin, Texas. Jam had just been launched at MacWorld in San Francisco with an amazing reception and SXSW was the next stop on our promotional tour.

Just a few weeks prior at MacWorld, our app stole the show with a rave review from Damon Waynes, daily demos by Sam Ludeman from The Voice and a live monkey to draw the attention of conference-goers to our booth. This (along with the fact that Jam is actually a pretty cool app) resulted in a ton of media coverage. It would be very hard to top at SXSW.

Moving forward a few weeks and the mega-festival that is SXSW rolled into the little city of Austin, inflating the population to double its normal size, as it apparently does each year. Sam, myself and the crew from app promotions agency, Appency, were among the influx.

We were the official sponsors of the music gear lounge at the conference, which we renamed the Jam Lounge and this became our home base for the week. From here Sam, myself and Appency’s Aaron Watkins
handed out drink cards to anyone who downloaded Jam and literally serenaded passers by with adlibbed songs we came up with on the spot. Jam turned our off-key wailings into pop songs, which we played through loud speakers and they were usually impressive enough to win over the recipient and get them to download the app for themselves.

Our biggest draw card for the week however, was a guest appearance at the Jam lounge by hip hop duo Macklemore and Ryan Lewis, who’s hit “Thrift Shop” was number one on the charts is the US and Australia at the time

Jena and Brian from Appency had set up a photo booth down one end of the lounge with a selection of thrift shop attire for people to dress up in and on the morning of the guest appearance we arrived to a thousand screaming fans cued up to get their pictures taken with their idols.

The chaos brought with it the attention of the media and when we arrived back in Australia, Jam was literally front-page news in Australian newspapers. We were also invited to appear on the Today Show

and The Project, which for an app developer is a pretty big deal.

In all, the net effect of SXSW and the resulting media reports on Jam app downloads was somewhere in the realm of ten to twenty thousand. It helped raise Jam’s total user base to about three hundred and fifty
thousand and the guest appearance by Macklemore and Ryan Lewis helped add credibility to the product, so I consider our SXSW experience to be a valuable one and definitely one I wont forget.